Congratulations to the winners of the WASTED Cover Reveal Giveaway!

Congratulations to the following winners in the Cover Reveal Giveaway for WASTED! I would like to thank everyone who entered. I sincerely appreciate your support! <3

Giveaway and Cover Reveal for WASTED! Plus Excerpt!

It's time to reveal the cover for WASTED, a new adult contemporary romance and the first book in the WHISKEY NIGHTS series! Plus, there's a GIVEAWAY! Check out www.SuzannahDaniels.com for your chance to win a $10 Amazon Gift Card, a WASTED necklace, and one of five signed WASTED bookmarks! Hurry! The contest is running for one week only! 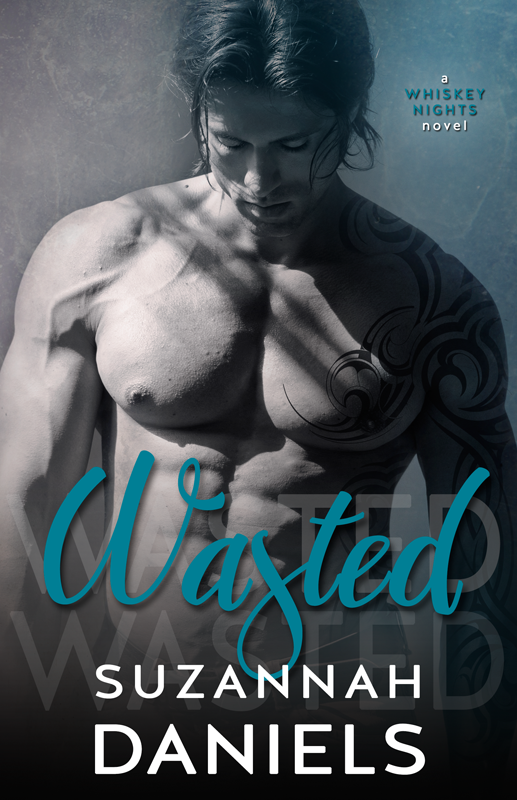 BLURB:
It all started with sex on the beach…the drink, not…you know.As a bartender, Mason Cambridge often charmed beautiful women who ordered up cocktails on his shift. It was part of his job after all, and he needed the tips—badly. When Lexi Swafford plopped her pretty little tail down on the bar stool, Mason offered her a drink. He had no idea that he would soon be working with her or that he’d be letting her room with him until her new apartment was ready.In fact, once Lexi Swafford landed in Creekview, Tennessee, life as Mason Cambridge knew it would cease to exist…because after a night of drinking away the agony of his loneliness, one touch from her would change everything.

WASTED is a new adult contemporary romance recommended for adult readers due to mature content. WASTED is the first book in the WHISKEY NIGHTS series. Since each book focuses on a different couple, they can be read as stand-alones, but many readers may prefer to read them in order for maximum enjoyment.

EXCERPT:
A muffled string of slurred expletives drifted down the hall. I jumped to my feet and listened at the door—more mumbling. Grabbing my robe from the closet, I wrapped it around me, tied the belt, and peeked out my bedroom door.
“Shit,” Mason muttered, followed by another thump.
I opened the door wider and ventured into the hallway, walking toward the source of the noise. The apartment was pitch black, so approaching the end of the hall, I groped the wall, searching for the light switch.
Finally, my fingers found it, and I flipped it on about the same time that Mason plowed into me. His arm wrapped around my waist, though I wasn’t sure whether he was trying to steady me, him, or both of us. The strong scent of alcohol hung heavy in the air.
“Dammit,” he whispered as he stumbled forward, tried to straighten up, and fell backwards instead, bringing me with him as we landed on the floor in another thud.
I could feel my breasts pressed against his hard, muscular chest as his arm still held me firmly against him. His head was tossed back, his chin jutting in the air, a deep rumble of laughter reverberating through his torso.
He lifted his head and looked at me, his lips still curled into a grin. His eyes were the color of whiskey, which, considering he reeked of alcohol, seemed fitting. “Sorry, roomie,” he slurred. “What was your name again?”
“Lexi,” I ground out between clenched teeth as I scrambled to get off him.
He released a cry of pain.
Realizing that I’d accidentally kneed him in the groin, a flood of heat exploded in my chest and torpedoed up my face. “Sorry,” I mumbled, relieved when my knees firmly hit the floor and I could push myself to my feet.
He attempted to raise himself up on his elbows, failing miserably.
I maneuvered behind him, slipping my hands beneath his arms, and tried to give him enough leverage to sit up.
It worked.
“Can you stand?” If not, then he’d just have to sleep in the hallway.
After a lot of fumbling and with my grip firmly on his arm, he finally stood.
“You didn’t drive, did you?”
“No. I never drink and drive. My friend owns a caxi tab.” He stumbled a few steps. “A caxi tab.” He shuffled forward again. “A caxi….”
“A taxi cab,” I supplied, gripping his arm tightly.
“Yeah.” He pointed his finger in the air. “One of those.”
I pushed his door open and flipped on the light. With his arm draped across my shoulders, we staggered into his bedroom. He lurched across the floor and fell onto his unmade bed. Relieved to be free of his weight, I straightened and swept my eyes across the room. It was sparsely furnished with a bed and a chest of drawers. Some change, a photo, and an empty glass sat on a small table, which served as a nightstand. “You okay?” I asked, turning my attention back to him.
“I’m good.” He never opened his eyes, but a slight wave of his hand seemed to motion to me that I could leave. My eyes turned back to the photo, and letting my curiosity outweigh my discretion, I walked over and picked it up. A beautiful girl looked at me, her smile wide and her mouth slightly parted as if she were laughing. Mason hugged her to him, his profile facing the camera as he pressed a kiss to her temple.
Realizing I was invading his privacy, I quickly put the photo down and walked toward the bedroom door.
“Lexi?”
I didn’t know whether I was more surprised that he said my name or that he actually remembered it. I turned back to him. “Yes?”
He opened his eyes and smiled, a flash of dimples in his cheeks. “You remember how to make a Devil’s Handshake?”
I hoped he wasn’t about to order one. I didn’t know how much he had drunk while he was out, but the last thing he needed was more alcohol. “I think so.”
“Good. Tomorrow, you can look forward to a Sloe Comfortable Screw.”
I assumed that was the name of another drink. As I watched the roguish grin spread across his handsome face, I realized that I’d shaken hands with the devil today, but it had nothing to do with an alcoholic beverage.
Posted by Suzannah Daniels at 9:24 AM No comments:

I'm currently working on a new series, which will be new adult contemporary romance. It will be a spin off from PERFECTLY ABLE and will begin with Mason Cambridge's story. Right now, my intention is for a series of stand-alone novels, meaning that readers won't have to read them in any particular order. They will share the common setting of the fictional town of Creekview, Tennessee. I'll have more details soon!
Posted by Suzannah Daniels at 5:43 PM No comments:

DELIRIOUS, the third book in the DANGEROUS Trilogy (mature YA contemporary romance) will be released on Feb. 7, 2014! I'm so excited! I love Stone and Dara, and they've been so much fun to write!

I want to give you a sneak peek of DELIRIOUS, but there are *SPOILERS* if you haven't read DANGEROUS and DEVIOUS yet. DANGEROUS is currently only 99 cents, so if you haven't already met Stone And Dara, what are you waiting for?